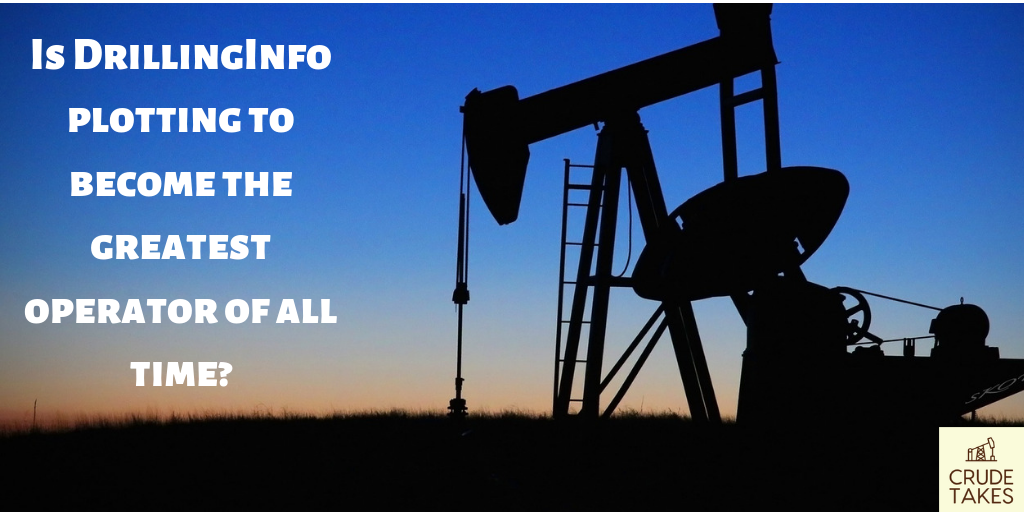 While we have many friends at DrillingInfo, we have no knowledge of any plans for DrillingInfo to become an operator - this post is purely speculation with facts and news items that are public knowledge

DrillingInfo was recently acquired by the private equity behemoth Genstar Capital. Most SaaS (software as a service) companies that get acquired by a private equity shop fall into a pretty standard category and a repetitive set of procedures:

First, the P.E. firm finds SaaS businesses that are very “sticky” (i.e., the customer turnover is very low). How many times have you talked to a DrillingInfo customer that switched to ShaleXP or DrillingEdge. Occasionally, you’ll find your price sensitive customer switch, but by and large DrillingInfo’s churn rate is almost assuredly one of the lowest of any SaaS businesses of all time. They’ve created a product, which is merely just scraping and standardizing public data, and put up a huge paywall around it and integrated into nearly every aspect of the modern oil and gas company. It’s truly remarkable.

After the private equity firm finds a sticky business, like DrillingInfo, they realize immediately that cutting costs is the name of the game. And why hire 200+ salespeople if no one is ever canceling your service?

Next, the private equity group (and the company they acquired) go and look for companies that have overlapping interests or touch some of the same customers that the company touches - which is the phase DrillingInfo currently is in. Do you have a product that could expand the range of business services for DI or are you a moderate threat to DI? Congrats, you’re likely to get acquired.

After the private equity firm is done acquiring any threats and has cut all unnecessary costs, they’ll repackage DrillingInfo up for a public market exit or to the next private equity firm that thinks there’s some more juice to squeeze out of the business.

Current winners of the DrillingInfo acquisition lottery include

What does it mean for DI to own all these additional tools in it’s war chest?

That’s a lot of acquisitions for a company that more or less owns the entire oil and gas software side with no real competitors. Could DI be looking at a much bigger play? I noticed some patterns and some interesting components of the businesses that they’ve acquired that make me believe they are more likely to turn into an operating company than a traditional software player - and doing so will make them the most ruthless, technologically sound oil and gas operator of all time. Think about it - DI’s current line of products allow you, the customer, to analyze and do the following:

If the customer can do all of that, it means the company can as well. Delving into some of the most recent acquisitions, we see that DI has completed it’s takeover of every single component it was missing to truly be able to operate wells, take leasehold, and use data to make the most comprehensive data-driven solutions known to the industry. Here’s what a hypothetical DrillingInfo Operating Company could do with it’s most recent acquisitions:

What does this mean? It means that DI now knows the AP/AR (thus, the costs) for a huge network of oil and gas operators. They know exactly how much vendors charge, who the cheapest is, etc. Now, take this data set and overlay it with production - and they know, internally, who the most efficient operators are. They can look and say “wow, Conoco’s expenses in the San Juan Basin are really expensive, and these are the crews they hired. But their production in NE part of the Lea County is much better than in the SE part on a per well basis.” They could sell that data point to Conoco (who is likely doing some rudimentary analysis internally on this) - or even better, they could just contact the more efficient crew themselves and start drilling.

Now DI can start to piece together entire division of interest in many wells. If they wanted to acquire assets, they could know exactly how much a family office, hedge fund, or royalty fund was making down to the penny and make an acquisition that way. They could also overlap that with the Cortex data to buy ahead of the drillbit. What do I mean by that? What if they looked at the Cortex data and started to see Geologists with a background in Glasscock Country start to go on payroll for a particular company. DI can get ahead of the bit there.

With DI Courthouse, it’s a pretty novel solution to run title from your house (alternatively, you can use a service like TexasFile). But every click, every interaction, every section of title you’re looking at can be captured on the backend of the DI warehouse. Amazon, Google, and Facebook knows that you do on every corner of the internet - even when you’re not on any of their websites. It’s silly to think DI doesn’t know when particular operators log into their accounts and start running title in particular sections of counties.

Similar to MineralSoft and CorTex, DrillingInfo acquires the ability to store data and create a nice user interface for family offices, hedge funds, and mineral owners while hooking into the accounting systems of virtually every mid and large oil and gas company. They know when the payments are made, whom they are made to, and how much they are for. They know when royalty owners are overpaid, underpaid, marketing expenses are deducted, etc. Owning OilDex also allows DI to use this tool themselves to pay royalty owners in the wells it could drill.

On the surface, this appears to be an acquihire - basically a play to add machine learning experts to the DrillingInfo team that also happen to have domain expertise in oil and gas.

Nearly every E&P investor used/uses 1Derrick as a ‘Bloomberg terminal’ for the oil and gas industry. It’s real-time news and analysis were/are some of the best in the industry. DI can start to look at analytics in articles and news to find out who is reading what, how they are doing it and beat folks to the punch on exploring new basins and fields.

DrillingInfo has a pretty robust team

At the time of the Genstar acquisition, it was quoted that Austin, TX-based DI had ~675 employees across 13 countries around the world. Its team includes petroleum engineers, software developers, product experts, landmen, sales guys, geologists, finance folks, and more.

If I told you the that Conoco, Shell, or Exxon had all this data at its fingertips you’d be crying foul to the regulators and forcing their hand at sharing some of this stuff publicly or you wouldn’t be in the market because you could never gain a discernable advantage when trying to develop land or drill wells.

But what I described above isn’t a mid-size E&P run by a former executive at another oil and gas shop. It’s DrillingInfo and with the pieces they have in place, I think GenStar is considering one of the biggest pivots in SaaS history and they’ll rename DrillingInfo to DI Operating Co.

Before jumping and e-mailing/tweeting us that we have no clue what we are talking about or that we’re blatantly wrong, understand that yes, we get that selling picks and shovels in the middle of a gold rush is a great way to make a lot of money. And DrillingInfo has no shortage of money after was surely close to a 500mm buyout by Genstar. But there’s also very little doubt that DI already has the resources and a massive technology edge in being able to pull this off.

The common rebuttal is ‘Well DI has millions of dollars in contracts with current E&P companies to deliver data!’ Yah, well, drilling wells, acquiring minerals, and owning leases can be much more lucrative in a shorter window of time than building an enterprise SaaS business. Just ask these guys. Canceling contracts is very easy when the upside is so much bigger and the public markets are more receptive and more liquid.

I think we’re going to see the biggest pivot for a SaaS business in history.